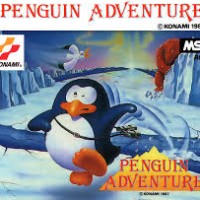 Penguin Adventure is a challenging and exciting adventure of a brave little penguin in a world full of monsters. You will control the character running through different obstacles and monsters and collect items to reach the final area of ​​each level.
A deadly disease has spread throughout the penguin kingdom, people are bewildered even affecting the idol Princess Penko. The only cure is a penguin named Penta will return the golden apple from the dream continent to save Princess Penko and the people of the kingdom.
A simple game with 3 worlds and 15 levels with funny monsters with beautiful graphics, funny sounds will give you great relaxing moments.
You can help him to slide fire or even fly with cannons or rockets. To eliminate a monster you can jump on it or throw a pebble. Obstacles appear in each level such as holes in the ground, logs, boulders, and traps like invisible blocks that can only be seen with special goggles. Dangerous enemies such as slime, bat, and hedgehog will kill you if you do not have any hindrance. Most obstacles will only stop you for a moment, but some will kill you immediately.
On the way, there is a series of powers that you can collect and use, such as time-stretching hearts, wings that take you to bonus levels, and fishermen will accept fish as currency in exchange for items such as guns and propeller caps. Also, use your fish collecting skills on the way to score points, collect fruits, coins and specials on the way to get 3 stars in each level and help penguins get closer to my goals.
How to play Penguin Adventure
The game is controlled via the following arrow keys: use the up arrow to jump and hold to jump longer, use the down arrow to slide.