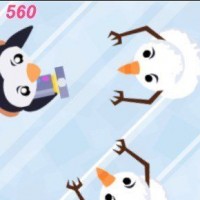 Click Snowball Fight is a fighting game to protect your snow castle from evil penguins. The game is a combination of three elements along with aspects of tower defense.
The penguin pirates are marching towards your snow castle, besieging you by an army of angry penguins and you must make efforts to protect your castle and prevent their attack. Defend as long as possible and keep your fortress safe from very interesting attacks and spells, including moves like fireballs and ice beams.
The game screen will be divided into two parts, the left is a snowy field along which the penguins will go in your direction and the right will be placed in multi-colored cubes. You will throw a snowball at the penguin through matching blocks of the same color so a snowball will fly along with the penguin, which will destroy it. Match at least two blocks of the same color to eliminate attacks on penguins. When you combine three or more colored blocks, you can now unleash combined attacks and devastate special attacks. Alternatively, you can use four special attacks available, but the attack can be reduced so don't rely on them too much. Click on snowballs of the same color to shoot at penguins, and choose larger groups of snowballs to perform combo attacks.
After defeating all the penguins, you will unlock the next level along with the much more and more aggressive penguins. The game requires a flexible reaction, agility, sharpness to quickly see and match blocks of the same color and quickly destroy the penguins before they destroy your stronghold.
Fun games bring you lots of fun with a beautiful interface and help stimulate the development of your brain.
The game is compatible with most devices so you can play it anywhere, anytime you want.
How to play
A simple game with clicking on the orbs to perform the attacks.