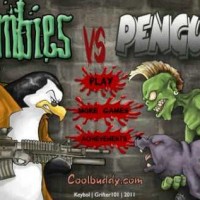 On cold winter nights, under the full moonlight, there is an ongoing battle between undead and penguins, zombies vs penguins. This is a physics-based shooting game that challenges players with the goal of destroying all zombies in each stage with a limited number of bullets. Preserve your ammo by shooting them so they shoot off walls and objects. Not all zombies can be killed with bullets, so you will need to use sharp objects and explosives to complete some levels! Kill all zombies in each level by shooting them. Get awesome bonus points for headers.
The fight between zombies and penguins has burned, participating in the game, Zombies vs Penguins will make players become a fearless gunman and deal with all immortal opponents. Try to hit the head of the zombie, because you get valuable bonus points. Remember that the number of cartridges you have is limited. Use the reflexes of bullets from the walls. Your points account of zombies vs penguins also makes a difference when you hit one of the delicious dishes on the board.
Zombies vs Penguins is a game that any gamer should try because apart from the appeal that the game brings, the visual and sound of the game is also a noticeable plus point. Join the game you will have the opportunity to immerse yourself in the very vivid virtual world as well as show your shooting skills. Can you become an excellent player and win convincingly in this game? Start the game now to have yourself the best experience possible!
How to play zombies vs penguins:
Use your mouse to aim the gun and skillfully shoot bullets off the wall to kill all zombies in each level. I wish you success!