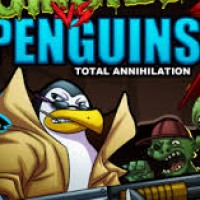 Zombies vs Penguins 3 is a sequel to the fun shooting game that brings the battle between penguins and hungry zombies. Become brave penguins who are ready to protect themselves and the world. Your task is to kill all zombies, or they will destroy us. Get weapons and shoot, pay attention and calculate because the bullet can bounce back and kill more zombies!
The bloody battle between zombies and penguins does not stop and you will act as a cold penguin shooter, you will have to fight the zombie enemies that have attacked the world. You will have to try to kill all the undead that are attacking the feathered people. You are the only one of the animals as well as humans to survive. Shoot and try to use as little as a shot to destroy a large number of these enemies. Try to hit the targets with a few bullets you have, without wasting them. Complete each level in the best way possible. To clear a level, you have to place the bullet in the middle of each zombie's eye on the stage. Remember that bullets can fire again, which means that a single hit can take down many pests at the same time.
Zombies vs Penguins 3 is a great game for every gamer because, in addition to the hilarious and brutal battles that help you relieve the pressures of life, the image and sound quality is also a remarkable point. Italy in this game. It has left an impression on the players from the first moments when you participated in the game. Surely this will be a game that attracts players for hours that you should not ignore.
How to play zombies vs penguins 3:
Use the mouse and shoot your target without delay.