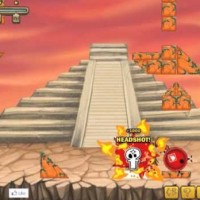 The penguins are back to escape the Mayan Zombie that forever wants to cause the Apocalypse in the Arctic in an exciting sequel titled Zombies vs Penguins 2. The zombie fight against the penguins continues There is no end and you need to take part in battles to defeat them all and win yourself the most glorious victory. There are lots of zombies standing still and shooting heads like men (dead), but some scary zombies lurking under rocks and behind exploding fuel tanks, so catch Start the game with a penguin and his magical staff, aim precisely at all and defeat all enemies in the minimum firing range possible. Try to destroy the immortal opponents by using your awesome laser gun. Get a higher score for the header. Pay close attention to the calculations because the shots may bounce off the wall and hit you back.
Take aim and kill all zombies, choose the best angle for your bullets. You have some available so you will have to be good to not waste them. So, the winter prophecy in the Arctic depends on you, will you be able to stop it in time?
This is a fun game, which allows you to dispel the stresses and stresses of life. With a clear interface, along with cute characters such as Angry birds, cute little sheep will surely attract you right from the first minute of play. Join the game now to try to see the ability to aim as well as you will get the maximum number of points in this fun-filled game.
How to play zombies vs penguins 2:
The gameplay is very simple when the player will use the mouse to aim and click to shoot but be careful, the blow is not bounced back and kills penguins!