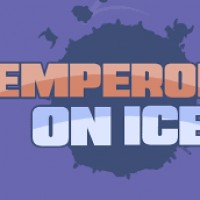 Emperors On Ice is one of the interesting penguin games. Environmental pollution has caused climate change and global warming, so the polar ice has melted, which is a great threat to the penguins. They are threatened and you need to show your command ability to protect the land of penguins.
Your task is to shoot enemies who are far away from you, on another iceberg, but not to hurt the little penguins that lie in the middle of your battle. This is a difficult thing but it will certainly be done.
You will control a penguin to destroy the invaders in another iceberg by adjusting and firing the cannon at the invaders. You and the invaders will fight in turn, adjusting the appropriate angle and firing force of the cannon to fire accurately at the invader. If you shoot incorrectly, please rely on those shots to adjust the shot direction more reasonably. After many experiences, you will have experience and easily kill enemies. When defeating enemies, you will receive upgrades for your weapons as well as your troops.
The game has many different levels, each level you will face different challenges and challenges along with more advanced upgrades. Levels with more enemies or obstacles, such as rugged or blocky ice blocks, longer ice sheets and characters that can move on them, have two or more enemy characters.
Players and enemies have a bar showing their health at the top when damaged, the blue bar will gradually turn red until the blue is out, the character will lose their life. Or you can kill the enemy by shooting it down from the ice.
How to play Emperors On Ice
The game is very simple gameplay, you just need to click and drag the mouse to see your shooting angle, then release to shoot a snowball.